The Chevrolet Corvette is a sports car that has been built by Chevrolet since 1953. It is now in its 8th generation.

The Corvette C1 was the first Corvette model. It was created by GM (General Motors) in 1953. It was designed by Harley Earl and it was a show car. Chevrolet only made 300 Corvettes in 1953, and they are all almost the same. The C1 was the only model of Corvette to have an inline-6 engine option, and the inline-6 was only available from 1953 to 1955. Because the C1 was expensive and kind of slow, it was in danger of not being made anymore. Chevrolet changed the C1 in 1956, which made it faster and better. Afterwards, the car became more popular, and the C1 was built until 1962. 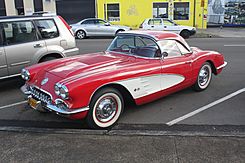 The Corvette C3 was the third Corvette model. It was made from 1968 to 1982. The C3 was very similar to the C2. The main changes were the body and the inside. The V8 engines from the C2 became more powerful. In 1971, because the engines were too bad for the environment, the engines' power went down. This made the C3 slightly slower and less powerful. Every year the engines became less powerful until 1975. This was because the U.S. government forced GM (General Motors) to make the engines better for the environment. The C3 Corvette convertible was not made after 1975, so only the coupe was for sale after 1975.

The Corvette C4 was the fourth Corvette model. It was made from 1984 to 1996. There were no 1983 Corvettes, except for a few made by Chevrolet that were used for testing. The C4 was the first time the Corvette was totally new. The C4 used many of the same engines as the C3 Corvette, but the body was totally new. The Corvette was made as a convertible again starting in 1986. 1986 was also the year the Corvette was a pace car for the Indianapolis 500 car race. Throughout the C4's life, new engines and transmissions were used. The C4 ZR-1 was a special edition of the C4, which was much faster than the normal C4. It was made from 1990 to 1995.

The Corvette C5 was the fifth Corvette model. It was made from 1997 to 2004. The C5 was much better than the C4 Corvette. The C5 had a new body, many new engines, and a better chassis. Because of the better engines and more aerodynamic body, the C5 Corvette The C5 was also much faster than the C4, and it had a top speed of 181 mph (miles per hour). The 1997 model was only available as a coupé with removable roof parts (known as a targa top), but in 1998 the Corvette convertible came on sale. Starting in 1999, a fixed-roof coupé went on sale. It is like the coupé but with a completely solid roof. It is sometimes called the "FRC." In 2001, a faster C5 was made, called the Z06. The Z06 was faster than the C4 ZR-1, which it replaced. There was also a race car version of the C5, called the C5-R.

The Corvette C6 was the sixth Corvette model. It was made from 2005 to 2013. The C6 was a fairly large improvement over the C5. Some of the changes were exposed headlights, better suspension, and a much better interior. The C6 was also faster than the C5. Starting in 2008, the C6 got a new engine that had 430 horsepower. This made the car even faster. Like the C5, the C6 had a Z06 model. The C6 Z06 had a very big engine and was very light for a Corvette. This made the Z06 very fast. Also, there was a model called the ZR1, which was even faster. The ZR1 featured a supercharged engine and was even faster than the Z06. The ZR1 is sometimes called the Blue Devil. It is the fastest Corvette C6. The ZR1 was first made in 2008. Like the C5, there was a race car version of the C6, called the C6.R.

The Corvette C7 is the seventh Corvette model. It was first made in 2014. It is known as the Corvette Stingray. The C7 is more advanced than the C6, and has a much nicer inside. The main engine is very similar to the one in the C6, but is now more powerful. The body of the C7 is different from other Corvettes. It has bigger headlights, very different back lights, and many more vents. The Corvette C7 is also available as a convertible. Like the C5 and C6, the C7 has a Z06 model. The Z06 is even faster than the C6 ZR1, and it has a supercharged engine. This engine makes 650 horsepower in the Z06. There is also a Z06 convertible for the first time ever. Like the C5 and C6, there is a C7 race car, which is called the C7.R.

The Corvette C8 is the eighth generation and is the current model, first produced on February 2020.

All content from Kiddle encyclopedia articles (including the article images and facts) can be freely used under Attribution-ShareAlike license, unless stated otherwise. Cite this article:
Chevrolet Corvette Facts for Kids. Kiddle Encyclopedia.