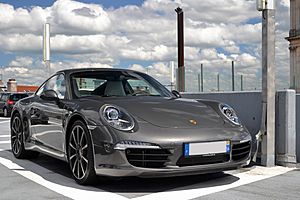 A sportscar is a small, fast, quick-turning car. Most of them only have two seats or very small seats in the back.

A sportscar is different from a car for racing. The sportscar is allowed to drive on a normal road. A sportscar also has things like a Radio and air conditioning.

Since the first automobiles people wanted to make cars go faster. The first sportscars were made for rich people to go racing.

There are different versions of sportscars. There are cars with the motor in the front and Rear wheel drive. Examples are the Chevrolet Corvette or the Honda S2000. There are also cars with the motor behind the passengers in the middle of the car. One of the first cars like this was the Lamborghini Miura. Porsche uses a different layout. The motor in a Porsche 911 is in the back, behind the rear wheels. Since the 1980s a lot of sportscars also have Four wheel drive. The motor in the front and Front wheel drive is only used in a few sportscars.

Most sportscars only have two seats. There are some sportscars that also have very small seats in the back. For example the Porsche 911. The McLaren F1 has three seats. The driver sits in the middle. 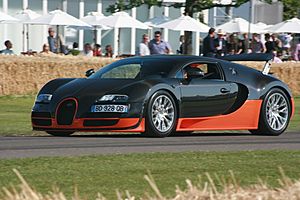 These are some sports cars:

All content from Kiddle encyclopedia articles (including the article images and facts) can be freely used under Attribution-ShareAlike license, unless stated otherwise. Cite this article:
Sportscar Facts for Kids. Kiddle Encyclopedia.