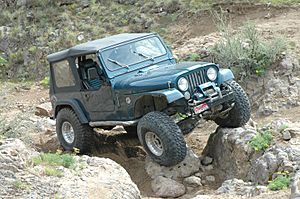 A Four-wheel drive (also called 4WD and 4x4) is a vehicle on which all four wheels get power from the engine to move forward. This is as opposed to a two-wheel drive vehicle. 4WDs are often used off road. Part-time and full-time four wheel drive vehicles uses a transfer case as part of the drivetrain to direct power to one or both axles. By having a transfer case the driver can shift the vehicle into either "two-wheel-drive" or "four-wheel-drive" mode (part-time systems). Many transfer cases also have a low power range that multiplies the engine power when in four-wheel drive (called four-wheel low gear).

There are basically four types of four-wheel drive.

Part-time systems are the most basic type. They are also still the most popular type for using off-road. The can be shifted (mechanically or electrically) from two-wheel drive to four-wheel drive. This gives them the versatility to operate both on and off-road. When the four-wheel drive system is engaged, the two axles turn at the same speed. There usually is no center differential. For that reason part-time four-wheel drive should not be used on dry pavement. If operated for any distance on dry pavement tire damage and drivetrain damage is very possible. Because it operates off-road, the vehicle typically has a higher Ride height. This is to go over obstacles on uneven ground without damage. Even when operated in two-wheel drive on-road, this system will not get the fuel economy of a comparable two-wheel drive vehicle. Locking hubs are available on some models. They help to get better fuel mileage by disengaging the front axle differential.

This is the original four-wheel drive. It was and still is designed for serious off-roading. Common on full-time four-wheel drives are locking differentials. These prevent one wheel slipping on the same axle if the other has traction. These systems do not get good gas mileage due to their typical weight. 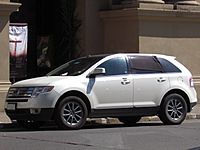 All-wheel drive (AWD) uses a center differential to direct a percentage of the power to both axles, depending on conditions. All wheel drive is not designed specifically to go off road but is for traction in rain, snow or ice on the road. Body-on frame SUVs are typically designed for off-road use. Unibody crossovers are usually only equipped with the lighter-duty all-wheel drive. However the unibody built Grand Cherokee and newly designed Durango are available with four-wheel drive.

Part-time All-wheel drive (AWD) operate as a front-wheel drive under normal conditions. When traction is lost for any reason, the system automatically sends a portion of the engine's power to the rear wheels. As soon as the system detects good traction, it disengages the rear wheels and shifts back to front drive. This is a less expensive system that adds less weight to the vehicle (usually a car). This makes it popular on compact vehicles. It typically gets better fuel economy than all-wheel drive vehicles. They do not have a low range or a transfer case.

All content from Kiddle encyclopedia articles (including the article images and facts) can be freely used under Attribution-ShareAlike license, unless stated otherwise. Cite this article:
Four-wheel drive Facts for Kids. Kiddle Encyclopedia.