The Jeep Wrangler is a compact Sport utility vehicle made by the Jeep division of Chrysler. It replaced the Jeep CJ which came from the World War II Jeep, or Willys MB. They Made 3 different kinds. The YJ the TJ and the JK. It is an off road Vehicle like all the other Jeeps. 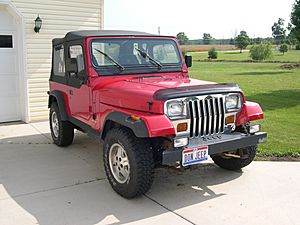 The Jeep YJ AKA Beijing-Jeep BJ 2024, and Jeep Sahra (Iran) was sold from 1987-1996.It rReplaced The Jeep CJ. It was better selling than the CJ. It had square headlights and was a little less round than the ones we see today, and had a hard steering wheel. It is more comfortable than the CJ, and less ground clearance for the road. It's both a truck and a convertible, same as the other Jeep Wranglers. 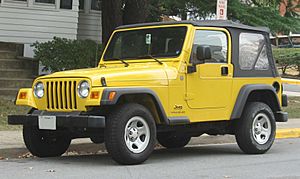 The TJ Jeep Wrangler AKA Dodge Wrangler TJ, was sold from 1997-2006, With a completely different change to it. It was more round than the previous. They sold in Unlimited versions too which were released in 2004. It can come in the V6 or the V8 engine. 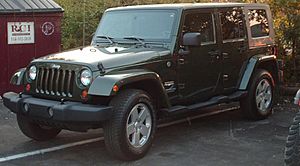 The JK Wrangler AKA Jeep J8, and Jeep TJL-J8 is the third and current version of the Jeep Wrangler. It has been around from 2007-present. The JK was a complete redesign from the Jeep TJ series. It also includes a new 4-door model Wrangler, called the JK Unlimited. The JKU is the largest Jeep Wrangler to date. Both the Wrangler JK and JKU are available with a 3-piece fiberglass hardtop called the Freedom top. It features removable sections over the driver and front seat passenger that can be removed leaving the rear portion of the hardtop in place. 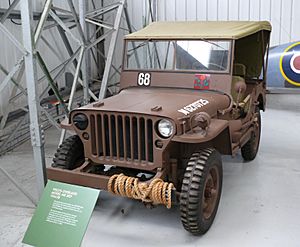 Willys-Overland Jeep Model MB, in the National Museum of Flight

All content from Kiddle encyclopedia articles (including the article images and facts) can be freely used under Attribution-ShareAlike license, unless stated otherwise. Cite this article:
Jeep Wrangler Facts for Kids. Kiddle Encyclopedia.