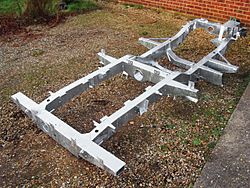 A vehicle frame, is the main structural element of a motor vehicle. All other components are connected to the frame. Another term for this design is body-on-frame construction. A vehicle's frame is part of the chassis.

The first motor vehicles were almost all built on a frame. Since then, nearly all cars have changed to unibody construction (see below). The last UK mass-produced car with a chassis was the Triumph Herald, which was discontinued in 1971. By contrast, today nearly all trucks and buses still use chassis frames.

Named because it resembles a ladder, the ladder frame is the simplest and oldest of all designs. It has two rails, or beams, and crossmembers connecting them. Most manufacturers stopped using them on cars around the 1940s. They are now seen mainly on trucks.

In a unibody (also unit body) design, the sheet metal of the body is also the frame. It may use subframes in certain areas. Unibody designs first appeared in the 1930s on some Citroën automobiles. Many modern vehicles use unibody construction including cars, minivans and crossovers. A few SUVs use unibody construction. An example is the Dodge Durango.

All content from Kiddle encyclopedia articles (including the article images and facts) can be freely used under Attribution-ShareAlike license, unless stated otherwise. Cite this article:
Frame (vehicle) Facts for Kids. Kiddle Encyclopedia.