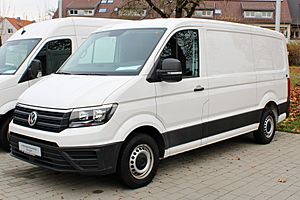 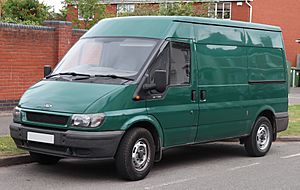 A van is a type of vehicle. A van can carry either goods or people. A van is usually bigger than the regular sized car. Panel vans (= vans whose cargo space has no side windows) are used for deliveries and carrying goods. These usually have large cargo space and few windows. A van which is used to carry people is often called a minibus. It can usually carry many people, sometimes up to a total of 15.

A minivan is smaller and usually carries up to seven people.

You may usually drive a van with the same driver's license as an ordinary car, but the heaviest and largest vans may require a truck licence.

The demand for minivans is dwindling due to the introduction of crossovers. However, some companies still make minivans. The most popular minivans are the Toyota Sienna and Honda Odyssey.

All content from Kiddle encyclopedia articles (including the article images and facts) can be freely used under Attribution-ShareAlike license, unless stated otherwise. Cite this article:
Van Facts for Kids. Kiddle Encyclopedia.