Center of mass facts for kids 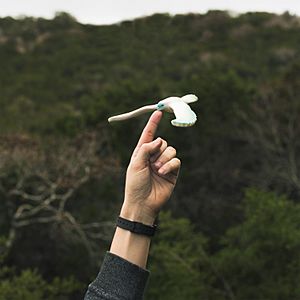 The center of mass is a useful reference point for calculations in mechanics that involve masses distributed in space, such as the linear and angular momentum of planetary bodies and rigid body dynamics. In orbital mechanics, the equations of motion of planets are formulated as point masses located at the centers of mass. The center of mass frame is an inertial frame in which the center of mass of a system is at rest with respect to the origin of the coordinate system.

The concept of center of mass was first introduced by the ancient Greek physicist, mathematician, and engineer Archimedes of Syracuse. Archimedes showed that the torque (turning force) exerted on a lever by weights resting at various points along the lever is the same as what it would be if all of the weights were moved to a single point — their center of mass.

Archimedes was the first person to work out ways of finding the center of mass in various objects.

Locating the center of mass 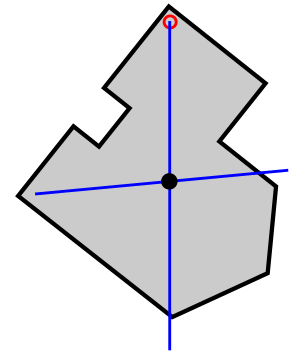 The shape of an object might already be mathematically determined, but it may be too complex to use a known formula. In this case, one can subdivide the complex shape into simpler, more elementary shapes, whose centers of mass are easy to find. If the total mass and center of mass can be determined for each area, then the center of mass of the whole is the weighted average of the centers. This method can even work for objects with holes, which can be accounted for as negative masses.

A direct development of the planimeter known as an integraph, or integerometer, can be used to establish the position of the centroid or center of mass of an irregular two-dimensional shape. This method can be applied to a shape with an irregular, smooth or complex boundary where other methods are too difficult. It was regularly used by ship builders to compare with the required displacement and center of buoyancy of a ship, and ensure it would not capsize. 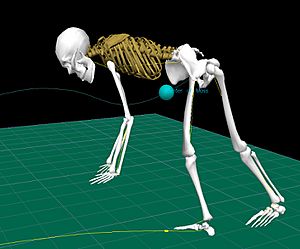 Estimated center of mass/gravity (blue sphere) of a gymnast at the end of performing a cartwheel. Notice center is outside the body in this position.

Engineers try to design a sports car so that its center of mass is lowered to make the car handle better. When high jumpers perform a "Fosbury Flop", they bend their body in such a way that it clears the bar while its center of mass does not necessarily clear it.

Main page: Center of gravity of an aircraft

The center of mass plays an important role in astronomy and astrophysics, where it is commonly referred to as the barycenter. The barycenter is the point between two objects where they balance each other; it is the center of mass where two or more celestial bodies orbit each other. When a moon orbits a planet, or a planet orbits a star, both bodies are actually orbiting around a point that lies away from the center of the primary (larger) body. For example, the Moon does not orbit the exact center of the Earth, but a point on a line between the center of the Earth and the Moon, approximately 1,710 km (1,062 miles) below the surface of the Earth, where their respective masses balance. This is the point about which the Earth and Moon orbit as they travel around the Sun. If the masses are more similar, e.g., Pluto and Charon, the barycenter will fall outside both bodies.

All content from Kiddle encyclopedia articles (including the article images and facts) can be freely used under Attribution-ShareAlike license, unless stated otherwise. Cite this article:
Center of mass Facts for Kids. Kiddle Encyclopedia.