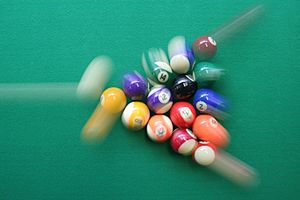 Momentum can be considered the "power" when an object is moving, meaning how much force it can have on another object. For example, a bowling ball (large mass) pushed very slowly (low velocity) can hit a glass door and not break it, while a baseball (small mass) can be thrown fast (high velocity) and break the same window. The baseball has a larger momentum than the bowling ball. Because momentum is the product of the mass and the velocity of an object, that both mass and velocity affect the momentum of an object. As shown, an object with a large mass and low velocity can have the same momentum as an object with a small mass and large velocity. A bullet is another example where the momentum is very-very high, due to the extraordinary velocity. Another beautiful example where very low-velocities cause greater momentum is the push of Indian subcontinent towards the rest of Asia, causing serious damages, such as earth quakes in the portions of himalayas. In this example, the subcontinent is moving as slow as few inches per year but the mass (imagine weight of India) of Indian-subcontinent is very high.

As defined by Newton, momentum of an object (p) is the product of the mass (m) and velocity (v) of the object. It is a vector quantity, which has both direction and magnitude. Its unit is kg m/s (kilogram metre per second) or N s (newton second). Momentum is sometimes referred to as linear momentum which is different from its related subject angular momentum.

In Newtonian physics, the usual symbol for momentum is the letter p ; so this can be written

where p is the momentum, m is the mass and v is the velocity
If we apply Newton's 2nd Law, we can derive

The meaning is that the net force on an object is equal to the rate of change in momentum of the object.

In order to use this equation in special relativity, m has to change with speed. That is sometimes called the "relativistic mass" of the object. (Scientists who work with special relativity use other equations instead.)

Law of conservation of momentum

All content from Kiddle encyclopedia articles (including the article images and facts) can be freely used under Attribution-ShareAlike license, unless stated otherwise. Cite this article:
Momentum Facts for Kids. Kiddle Encyclopedia.