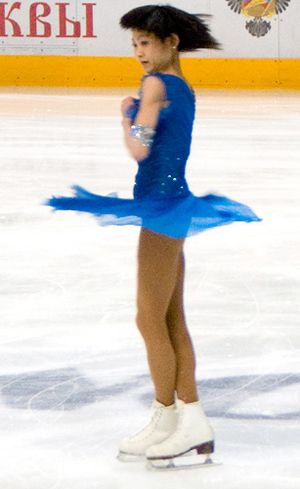 The angular momentum of the ice skater is conserved—as she retracts her arms and legs, her moment of inertia decreases, but her angular velocity increases to compensate.

The angular momentum or rotational momentum (L) of an object rotating about an axis is the product of its moment of inertia and its angular velocity:

is the moment of inertia (resistance to angular acceleration or deceleration, equal to the product of the mass and the square of its perpendicular distance from the axis of rotation);

is the angular velocity.

We use orbital angular momentum when we talk about an object (like a planet) orbiting around some axis that is not moving (like the Sun). That is, part of its motion is in a direction that is neither towards nor away from the axis; at least part of its motion is going around the axis. The orbital angular momentum also measures how hard it would be to stop the object from continuing to orbit around the axis.

All content from Kiddle encyclopedia articles (including the article images and facts) can be freely used under Attribution-ShareAlike license, unless stated otherwise. Cite this article:
Angular momentum Facts for Kids. Kiddle Encyclopedia.