A planet is a large object such as Jupiter or Earth that orbits a star. It is smaller than a star, and it does not make light.

Planets are shaped like a slightly squashed ball (a spheroid). Objects that orbit planets are called satellites. A star and everything which orbits it are called a star system.

There are eight planets in our Solar System. Pluto used to be called a planet, but in August 2006, the International Astronomical Union decided it was a dwarf planet instead. There are four more known dwarf planets in the Solar System, Ceres, Makemake, Eris and Haumea.

The name "planet" is from the Greek word πλανήτης (planetes), meaning "wanderers", or "things that move". Until the 1990s, people only knew of those in the Solar System. As of June 2011, we know of 563 other planets. All of these newly found planets are orbiting other stars: they are extrasolar planets. Sometimes people call them "exoplanets".

In the Solar System 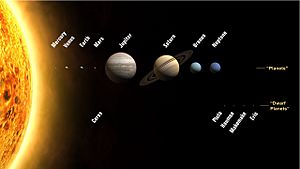 Planets of the Solar System

The planets in the Solar System have names of Greek or Roman gods, apart from Earth, because people did not think Earth was a planet in old times. However, Earth is occasionally referred by the name of a Roman god: Terra. Other languages, for example Chinese, use different names. Moons also have names of gods and people from classical mythology, or from the plays written by Shakespeare.

Here is a list of planets in the Solar System. They are ordered by how close they are to the Sun, nearest first. 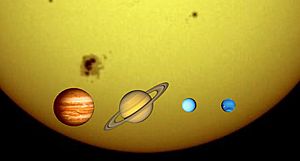 Astronomers speak about major (or true) planets, and minor planets, which are smaller objects that go around the Sun. Some examples of "minor planets" are asteroids, comets, and trans-Neptunian objects.

Planets in the Solar System are of three sorts:

All content from Kiddle encyclopedia articles (including the article images and facts) can be freely used under Attribution-ShareAlike license, unless stated otherwise. Cite this article:
Planet Facts for Kids. Kiddle Encyclopedia.