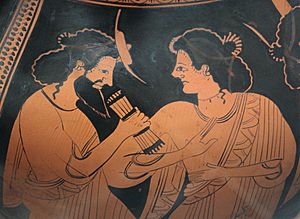 Hermes with his mother Maia. Detail of the side B of an Attic red-figure belly-amphora, c. 500 BC.

The caduceus of Hermes

Hermes is the messenger of the gods. He is the god of travellers and shepherds in Greek mythology. He is one of the Twelve Olympians, and is often shown with his caduceus.

Hermes is the son of Zeus and Maia. He was born on Mount Cyllene. The story of his birth was told in the Homeric Hymn, which means Hymn to Hermes. It said that Maia was a nymph.

Hermes was very clever and on his first day invented the lyre, by using the shell of a tortoise. One of the myths about Hermes is that he once stole his brother's oxen, and burned them as a sacrifice.

All content from Kiddle encyclopedia articles (including the article images and facts) can be freely used under Attribution-ShareAlike license, unless stated otherwise. Cite this article:
Hermes Facts for Kids. Kiddle Encyclopedia.