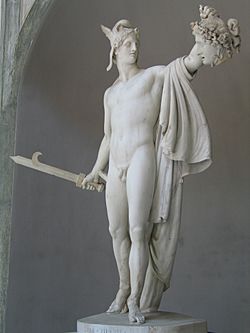 Perseus with the head of Medusa, by Antonio Canova, completed 1801 (Vatican Museums)

Perseus is a hero in Greek mythology. He is the founder of Mycenae and is most famous for killing the Gorgon Medusa.

He is the son of Danaë and the god Zeus.

With his wife Andromeda his children are the sons Perses, Alkaios, Sthenelos, Elektryon, and the daughter Gorgophone. Perseus is also the great-grandfather of Herakles.

King Akrisios of Argos was told by an oracle that he would be killed by his grandchild. Because of that he put his daughter Danaë in a tower where no one was allowed to enter, so she could not have a child. But the god Zeus could enter in the form of a golden rain, and with him her child was Perseus.

Akrisios then put Danaë and her baby Perseus in a box and threw it into the sea. But Zeus tells the sea-god Poseidon to help them, and so Danaë and her son come to the island Seriphos. There they are found by Diktys, who lets them live with him.

A long time after that, the grown up Perseus takes part in some funeral games. During the games Perseus throws a discus, which accidentally hits Akrisios. Akrisios is killed by it: he was killed by his grandchild, like the oracle's prophecy said.

All content from Kiddle encyclopedia articles (including the article images and facts) can be freely used under Attribution-ShareAlike license, unless stated otherwise. Cite this article:
Perseus Facts for Kids. Kiddle Encyclopedia.