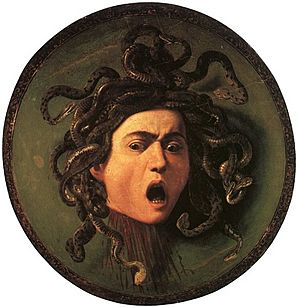 Medusa is a character in Greek mythology. Her story has been told and retold by ancient and modern storytellers, writers, and artists.

The Latin poet Ovid writes in Book IV of his Metamorphoses that Poseidon attacked Medusa in the temple of Athena. The goddess became angry, and changed Medusa into a monster with snakes for hair.

Medusa has been depicted in the visual arts for centuries. Many interpretations surround the myth. For the ancients, an image of Medusa's head was a device for averting evil. This image was called a Gorgoneion. The Gorgoneion was very scary and made all the children cry, but worked only against Medusa and not her sisters. 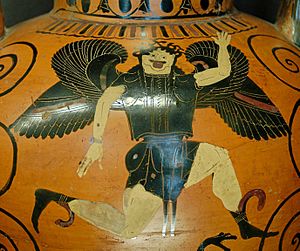 Medusa was one of three sisters. They were known as The Gorgons. Medusa's sisters were Stheno and Euryale. Medusa was mortal, but her sisters were immortal. They were all children of the sea deities, Phorkys and his sister Keto. Before they were monsters, all three sisters were beautiful young women, particularly Medusa; however, she was a priestess in the temple of Athena.

Any man or animal who looked directly upon her was turned to stone. The hero Perseus beheaded Medusa by viewing her reflection in his burnished shield. After using the dreadful head to defeat his enemies, he presented it to Athena and she put it on her shield. 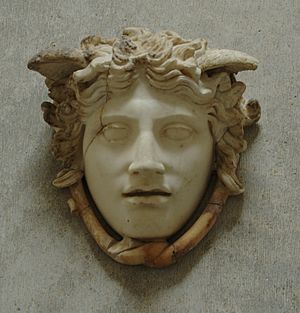 Medusa, a Roman copy of a Greek original by Phidias

Medusa was a subject for ancient vase painters, mosaicists, and sculptors. She appears on the breastplate of Alexander the Great in the Alexander Mosaic at the House of the Faun in Pompeii, Italy (about 200 BC).

A Roman copy of Phidias' Medusa (left) is held in the Glyptothek in Munich, Germany.

Among the Renaissance depictions are the sculpture Perseus with the Head of Medusa by Benvenuto Cellini (1554) and the oil painting Medusa by Caravaggio (1597). 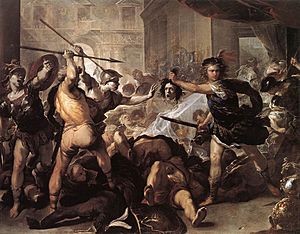 Perseus Fighting Phineus and his Companions by Luca Giordano (about 1670)

Baroque depictions include Head of Medusa by Peter Paul Rubens (1618); the marble bust Medusa by Bernini (1630s); and Perseus Turning Phineus and his Followers to Stone, an oil painting by Luca Giordano from the (early 1680s).

All content from Kiddle encyclopedia articles (including the article images and facts) can be freely used under Attribution-ShareAlike license, unless stated otherwise. Cite this article:
Medusa Facts for Kids. Kiddle Encyclopedia.