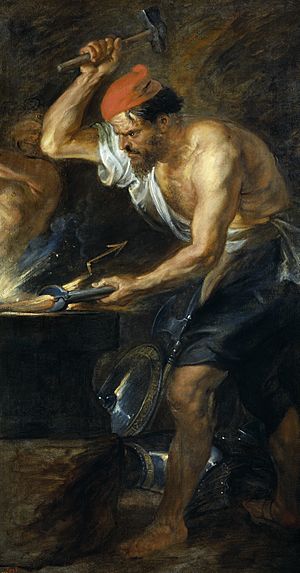 Hephaestus was the Greek god of fire and volcanoes. His Roman equivalent is the god Vulcan. He was prayed to by metal workers. Hephaestus mother and father were Hera and Zeus. His grandparents were Kronos and Rhea.

When Hephaestus was born, he was ugly and weak, with a broken foot. Hera did not like the way he looked and threw him off her castle which was on top of the clouds. Hephaestus fell for one day and one night before falling into the sea. The sea animals rescued him and took him to an island called Lemnos. There Hephaestus built his forge underneath a volcano. He collected precious metals, pearls and pieces of coral to fashion extraordinary! jewelry. Hephaestus built little robots of gold to help him get around. Hephaestus even worked with the Cyclopes (one eyed creatures). To impress the gods and goddesses, he made a set of golden thrones for them.

Hera realized her mistake of throwing Hephaestus off Mount Olympus and pleaded Zeus to welcome Hephaestus back. Hephaestus politely refused, saying that he was quite happy where he was. Then he set to work and fashioned a beautiful golden throne and sent it to Hera as a ‘thank you gift’ for the invitation. The instant she sat on it, golden ropes flew out and tied her up locking her into the chair.

Hephaestus was still very angry with Hera because she threw him of Mount Olympus. Even though everyone tried to free Hera from the great trap, Hephaestus’ design was so clever that none could detach the ropes. So, Zeus sent his son Ares, god of war, to bring Hephaestus back to let Hera loose. Instead Hephaestus made him run away throwing firebrands at him, and Ares made a shameful retreat. Zeus used trickery next and sent Dionysus, the god of wine, to get Hephaestus drunk. Hephaestus was not a regular drinker, and Hephaestus got drunk very quickly. Soon Dionysus was making his proud return to Mount Olympus, with drunk Hephaestus on the back of a mule. Hephaestus finally freed Hera and moved back to the forges because he did not like the busy life of the palace. Although, he still refused to forgive Hera.

Hera felt very guilty and gave him loads of supplies, materials, tools, and helpers for his workshop. Hephaestus made the best weapons, jewelry, and armor. Some of his greatest creations ever were the silver bows and arrows of Artemis and Apollo as well as Apollo’s golden chariot. He also made the shield of Achilles, Athena's spear, and Hercules' breastplate. In addition to this he made the scepter of Zeus and the battle armor of the Olympian armies. He also made all of the gods and goddesses palaces and their unbreakable locks. On top of all this, Hephaestus was and is still credited with the invention of the three-legged stool and the world’s first robots. Hephaestus helpers included a complete set of life size golden maids who helped around the house.

Hephaestus married Aphrodite. When Aphrodite emerged from the sea (created by the sperm of the severed member of Uranus,) Zeus feared that the gods would battle over her hand in marriage, so Zeus arranged that Aphrodite would marry Hephaestus. Hephaestus gave Aphrodite his best creations and even gave her a magic girdle that made her irresistible to men. However, Aphrodite did not love him as she was married against her will and she didn't like Hephaestus' looks. She spent most of her time with Ares.

Hephaestus was well liked by all of the Olympians. He was not involved in their plots. Hephaestus preferred to be alone in his workshop. Hephaestus was also worshiped by the Greeks because he proved that those who labor are also noble. Hephaestus reminds us of the value and dangers of losing our selves in work.

All content from Kiddle encyclopedia articles (including the article images and facts) can be freely used under Attribution-ShareAlike license, unless stated otherwise. Cite this article:
Hephaestus Facts for Kids. Kiddle Encyclopedia.