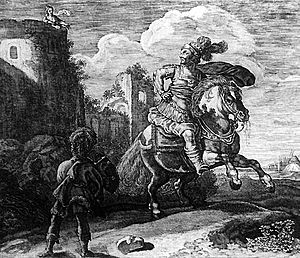 17th-century engraving of Scylla falling in love with Minos 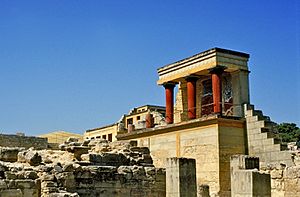 Minos was the mythical first king of Crete, son of Zeus and Europa. The following stories are mythological, and have no real historical basis.

Every nine years, he made King Aegeus pick seven young boys and seven young girls to be sent to Daedalus' creation, the labyrinth, to be eaten by the Minotaur. After his death, Minos became a judge of the dead in the underworld.

He once had a wife named Pasophae. Minos upset the Greek gods by cheating them in a sacrifice. He told Poseidon that he would sacrifice a beautiful bull that Poseidon gave him after he used it. Instead, he switched it with another bull. They punished him by having Pasophae fall in love with a bull.

Pasophae asked Daedalus to help her, so Daedalus made a mechanical cow for her, and she got into it. The bull mated with the wooden cow and Pasophae had a child. It was the Minotaur, half human, half bull.

King Minos took the Minotaur and put it in a labrynth, or maze, built by Daedalus. When he was in possession of all of Crete he ordered that fourteen young people come to him to be sacrificed to the Minotaur. Theseus volunteered to be one of them, and went there with daughter, Ariadne. He killed the Minotaur in the labyrinth.

The Minoan civilization was later named after him by Arthur Evans. Evans was the archaeologist who discovered and excavated the palace of Knossos in Crete.

All content from Kiddle encyclopedia articles (including the article images and facts) can be freely used under Attribution-ShareAlike license, unless stated otherwise. Cite this article:
Minos Facts for Kids. Kiddle Encyclopedia.