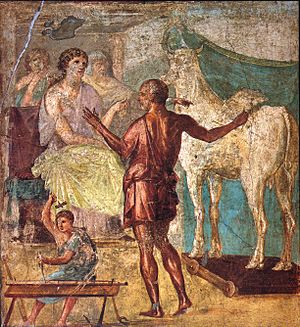 Daedalus and Pasiphaë. Roman fresco in the House of the Vettii, Pompeii, first century AD.

Daedalus was King Minos' head architect in ancient Greece and son of Athena. When King Minos of Crete was having some sovereignty problems, he asked Poseidon, god of the sea, for an offering to sacrifice to him as a sign as true kingship. So Poseidon sent a snow-white bull straight out of the sea foam. Once the people of Crete saw the bull, they all agreed that it was a sign of true kingship. However, once King Minos saw the bull, he refused to sacrifice the bull, kept it for himself, and sacrificed another bull to Poseidon, thus angering him. Poseidon put a curse on Minos’ wife, making her fall in love with the bull. She loved it so much that she wanted to mate with it. Minos called for the help of Daedalus, who built a wooden bull and put Queen Pasiphae inside it, thus calming her anxiety for mating with the bull. She soon became pregnant with half-man, half-bull (also called the Minotaur).

King Minos was horrified and asked Daedalus to build some kind of prison to keep the Minotaur from destroying Crete. So Daedalus built a labyrinth that was so complicated that the Minotaur could not get out. Only Daedalus knew the course of the labyrinth. Minos was afraid that Daedalus would tell the route through the labyrinth, and that he would tell that the Minotaur was the son of Minos' wife, he imprisoned Daedalus and his son Icarus, in a high tower. Daedalus made some wings that he strapped to his and Icarus’ arms and together they escaped from the tower. However, Icarus, forgetting his father’s words, flew too close to the sun, and the wax that held the feathers together melted. Icarus fell into the ocean and drowned. Daedalus landed safely on an island, and in grief, he named the sea that he and Icarus had flown across the Icarian Sea.

All content from Kiddle encyclopedia articles (including the article images and facts) can be freely used under Attribution-ShareAlike license, unless stated otherwise. Cite this article:
Daedalus Facts for Kids. Kiddle Encyclopedia.