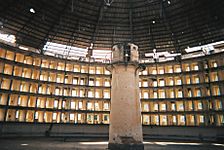 Inside view of Presidio modelo, a prison on an island, in Cuba 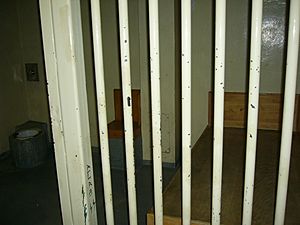 The prison at a police station in Germany

A prison (also called a jail or gaol) is a building where convicted criminals are held and incarcerated. Some prisoners are serving long terms or life sentence while some are waiting for trial. Those with short terms are probably locked up in a jail rather than prison.

Prisons are run by the government. Other words for prison include "penitentiary", "jail" or "gaol" (pronounced like "jail"), and "correctional facility". Some prisons or jails are called satellite camp, normal prison, special prison for death rows and maximum security prison. Inmates are forced to wear prison uniform with different bright colours from orange, blue, green and more depend on the prison. For instance, some prisoners who are prison workers might wear orange, or some prisoners with bad criminal records wear red uniform or vice versa.

A person who has been charged with a crime, but has not yet been convicted for it in a court, may be sent to prison if:

People held in prisons are called inmates or prisoners. Those who have been sentenced to prison because of a crime are also called convicts.

In some countries, prisons are also used for political prisoners (people who disagree with the country's leader or government). In times of war, prisoners of war may also be held in prisons.

All content from Kiddle encyclopedia articles (including the article images and facts) can be freely used under Attribution-ShareAlike license, unless stated otherwise. Cite this article:
Prison Facts for Kids. Kiddle Encyclopedia.