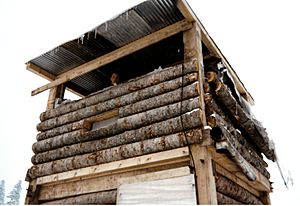 A Watchtower or watch tower is a tower used for surveillance. They were used at city walls to see invaders, when they were far away, so the city could prepare for an attack. A watchtower is also used for watching over people (like a town or a city). Watchtowers were popular in the Middle Ages. They are still often used to watch over prisoners and make sure that they don't escape or leave the area. Forestry uses watchtowers to find fires before they become more dangerous.

All content from Kiddle encyclopedia articles (including the article images and facts) can be freely used under Attribution-ShareAlike license, unless stated otherwise. Cite this article:
Watchtower Facts for Kids. Kiddle Encyclopedia.