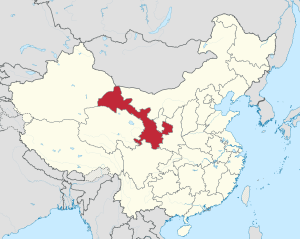 Gansu (simplified Chinese: 甘肃; traditional Chinese: 甘肅; Wade–Giles: Kan-su, Kansu, Kan-suh) is a province of the People's Republic of China. The capital is Lanzhou, in the southeast part of the province.

Most people of Gansu are Han Chinese.

The province is mountainous in the south but flat in the north.

The Gobi Desert lies partly in Gansu, and the Yellow River flows in the south.

It contains the geographical centre of China.

Gansu Province has a dry continental climate with cold winters and hot summers.

All content from Kiddle encyclopedia articles (including the article images and facts) can be freely used under Attribution-ShareAlike license, unless stated otherwise. Cite this article:
Gansu Facts for Kids. Kiddle Encyclopedia.