Tibetan Buddhism (Tibetan: བོད་བརྒྱུད་ནང་བསྟན།; Chinese: 藏传佛教) are Buddhist teachings from Tibet. It is part of Mahayana buddhism and is one of three main branches still practiced today. The other two are Han Buddhism and Theravada. It is most widely practiced around the Himalayas, Central Asia, and Siberia.

It includes all of the Buddhist teachings (or "three vehicles"). All traditions of Tibetan Buddhism practice the vows of moral discipline (Pratimoksha) of the hearer's vehicle (Shrāvakayāna); the vows of universal liberation and philosophy of the great vehicle (Mahāyāna); and the pledges and special methods of the secret mantra vehicle (Vajrayāna).

In the 7th century, Songtsen Gampo married two Buddhists: Tang Dynasty Princess Wencheng and Nepali Princess Bhrikuti. They helped spread Buddhist teachings to Tibet. Buddhism was merged with local Bön religions of the Zhangzhung to create a new kind of Buddhism: Tibetan Buddhism. The Tibetans also began translating texts from Sanskrit and Chinese; and began writing some of their own texts. In the 8th century, an Indian teacher called Padmasambhava brought some more Buddhism while Trisong Detsen was king of Tibet. He also wrote a number of important texts.

In the 11th century, Tibetan Buddhism strong influenced the peoples of Central Asia, Mongolia and Manchuria. It was very popular during the Mongol Yuan dynasty and the Manchu Qing dynasty of China.

Some of the teachings of Tibetan Buddhism are Mahamudra, the Six Yogas of Naropa, and Dzogchen.

Classical Tibetan is the main language for Tibetans. But texts have also been translated into Mongolian, Manchu, and Chinese. 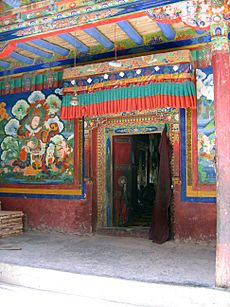 Monasticism was the foundation of Buddhism in Tibet. There were over 6,000 monasteries in Tibet, however nearly all of these were destroyed by Chinese Red Guards during the Cultural Revolution. Most of the major monasteries have been at least partly restored while many others remain in ruins.

All content from Kiddle encyclopedia articles (including the article images and facts) can be freely used under Attribution-ShareAlike license, unless stated otherwise. Cite this article:
Tibetan Buddhism Facts for Kids. Kiddle Encyclopedia.