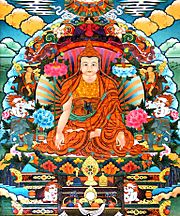 Nyingma is the name of one of the four major schools of Tibetan Buddhism. The Nyingma school is made up of several different lines that start with Padmasambhava, the legendary founder of Tibetan Buddhism. The word "Nyingma" means "ancient". Nyingma followers see themselves as holding the oldest teachings of Vajrayana. Some of these teachings can be found in the local Bön religion of Tibet.

All content from Kiddle encyclopedia articles (including the article images and facts) can be freely used under Attribution-ShareAlike license, unless stated otherwise. Cite this article:
Nyingma Facts for Kids. Kiddle Encyclopedia.