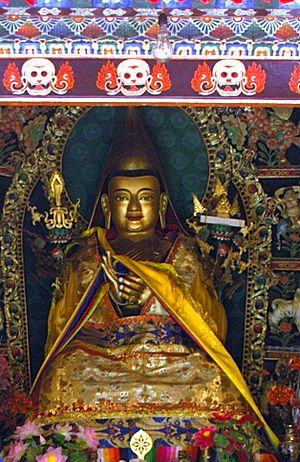 Statue of Je Tsongkhapa, founder of the Gelugpa school, on the altar in His Temple (His birth place) in Kumbum Monastery, near Xining, Qinghai (Amdo), China. Photo by writer Mario Biondi, July 7, 2006

The Gelug or Gelug-pa, is a school of Tibetan Buddhism founded by Je Tsongkhapa (1357–1419), a philosopher and Tibetan religious leader. The first monastery he established was at Ganden, and to this day the Ganden Tripa is the nominal head of the school, though its most famous person is the Dalai Lama. There are others Gelug Masters, like Trijang Rinpoche and Ling Rinpoche.

Tsongkhapa was a big promoter of the Kadampa (Bka'-gdams-pa) teachings and the mahāyāna principle of universal compassion as the fundamental spiritual orientation. He combined this with a strong emphasis on the cultivation of in-depth insight into the doctrine of emptiness as taught by the Indian masters Nāgārjuna (2nd century) and Candrakīrti (7th century). Tsongkhapa said that these two aspects of the spiritual path, compassion and insight into wisdom, must be rooted in a big wish for liberation driven by a genuine sense of renunciation. He called these the "Three Principal Aspects of the Path", and said that it is on the basis of these three that one must embark on the profound path of vajrayāna Buddhism.

The central teachings of the Gelug School are the Stages of the Path (lamrim), based on the teachings of the Indian master Atiśa (c. 11th century) and the systematic cultivation of the view of emptiness. This is combined with the yogas of highest yoga tantra deities such as Guhyasamāja, Cakrasaṃvara, Yamāntaka and Kālacakra, where the key focus is the direct experience of the union of bliss and emptiness.

All content from Kiddle encyclopedia articles (including the article images and facts) can be freely used under Attribution-ShareAlike license, unless stated otherwise. Cite this article:
Gelug Facts for Kids. Kiddle Encyclopedia.