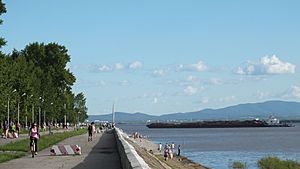 On the Amur in Khabarovsk 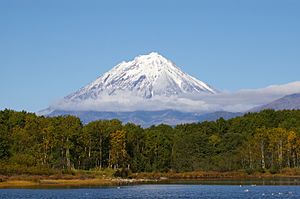 The Russian Far East is a region in North Asia which includes the Russian part of the Far East, the easternmost territory of Russia, between Lake Baikal in Eastern Siberia and the Pacific Ocean.

The Far Eastern Federal District shares land borders with Mongolia, the People's Republic of China and the Democratic People’s Republic of Korea to its south, and shares maritime borders with Japan to its southeast and with the United States to its northeast. Although occasionally considered part of Siberia, the Russian Far East is categorized separately from the Siberian Federal District to its west in Russian geographical schemes.

All content from Kiddle encyclopedia articles (including the article images and facts) can be freely used under Attribution-ShareAlike license, unless stated otherwise. Cite this article:
Russian Far East Facts for Kids. Kiddle Encyclopedia.