The Lena begins in the Baikal Mountains, a mountain range in central Siberia, at a point 7 miles (11 km) west of Lake Baikal. The Lena flows northeast. Some of its major tributaries are the Kirenga, Vitim, Oylokma, Aldan, and Vilyuy rivers. It empties into the Laptev Sea, a branch of the Arctic Ocean.

The name "Lena" comes from a word, Elyu-Ene, meaning "The Large River". The word comes from the Evenks, a people of Northern Asia. 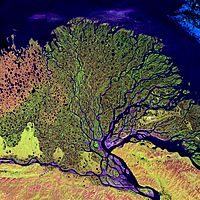 The mouth of the Lena River.

All content from Kiddle encyclopedia articles (including the article images and facts) can be freely used under Attribution-ShareAlike license, unless stated otherwise. Cite this article:
Lena River Facts for Kids. Kiddle Encyclopedia.