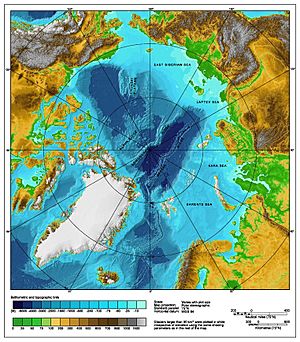 Arctic Ocean and the surrounding lands

The Arctic Ocean is the ocean around the North Pole. The most northern parts of Eurasia and North America are around the Arctic Ocean. Thick pack ice and snow cover almost all of this ocean in winter, and most of it in summer. An icebreaker or a nuclear-powered submarine can use the Northwest Passage through the Arctic Ocean to go between the Pacific and Atlantic oceans.

The ocean's area is about 14.056 million km2, which is the smallest of the world's 5 oceans, and it has 45,389 kilometres (28,203 miles) of coastline. The central surface covered by ice about 3 metres (9.8 feet) thick. The biology there is quite special. Endangered species there include walruses, whales and polar bears. Year by year the Arctic ocean is becoming less icy, as a result of global warming.

It is generally taken to include Baffin Bay, Barents Sea, Beaufort Sea, Chukchi Sea, East Siberian Sea, Greenland Sea, Hudson Bay, Hudson Strait, Kara Sea, Laptev Sea, White Sea and other bodies of water. It is connected to the Pacific Ocean by the Bering Strait and to the Atlantic Ocean through the Greenland Sea and Labrador Sea.

The Arctic Ocean is contained in a polar climate. Winters are characterized by the polar night, cold and stable weather conditions, and clear skies.

The climate of the Arctic region has varied significantly in the past. As recently as 55 million years ago, the region reached an average annual temperature of 10–20 °C (50–68 °F). The surface waters of the northernmos. Arctic ocean warmed enough to support tropical lifeforms 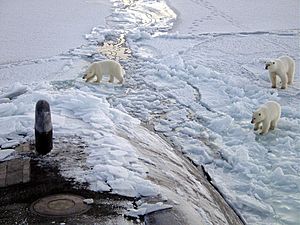 Endangered marine species in the Arctic Ocean include walruses and whales. The area has a fragile ecosystem which is slow to change and slow to recover from disruptions or damage. Lion's mane jellyfish are abundant in the waters of the Arctic, and the banded gunnel is the only species of gunnel that lives in the ocean.

The Arctic Ocean has relatively little plant life except for phytoplankton. Phytoplankton are a crucial part of the ocean and there are massive amounts of them in the Arctic, where they feed on nutrients from rivers and the currents of the Atlantic and Pacific oceans. During summer, the sun is out day and night, thus enabling the phytoplankton to photosynthesize for long periods of time and reproduce quickly. However, the reverse is true in winter when they struggle to get enough light to survive.

Petroleum and natural gas fields, placer deposits, polymetallic nodules, sand and gravel aggregates, fish, seals and whales can all be found in abundance in the region.

The political dead zone near the center of the sea is also the focus of a mounting dispute between the United States, Russia, Canada, Norway, and Denmark. It is significant for the global energy market because it may hold 25% or more of the world's undiscovered oil and gas resources.

All content from Kiddle encyclopedia articles (including the article images and facts) can be freely used under Attribution-ShareAlike license, unless stated otherwise. Cite this article:
Arctic Ocean Facts for Kids. Kiddle Encyclopedia.