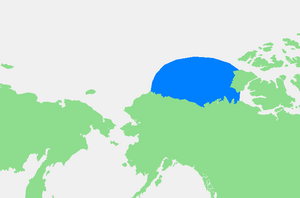 The Beaufort Sea is a marginal sea of the Arctic Ocean, north of the Northwest Territories, the Yukon, and Alaska, west of Canada's Arctic islands. The sea is named after hydrographer Sir Francis Beaufort. The Mackenzie River empties into the Canadian part of the sea. Tuktoyaktuk is one of the few permanent settlements on the sea shores.

The sea is frozen over most of the year. Only a narrow pass up to 100 km (62 mi) opens in August–September near its shores. The seacoast was populated about 30,000 years ago. The sea has many resources of petroleum and natural gas. They were discovered between the 1950s and 1980s. People started exploring the resources in the 1980s. There is a large amount of beluga whales. The United States and Canada do not agree about the sea border.

Several rivers such as the Kongakut River in Alaska and the Firth River in Yukon empty into the Beaufort. The major river to flow into the sea is the Mackenzie, Canada's longest. The coastal shelf area is rather narrow, especially near and east of Point Barrow in the Alaskan part of the sea. It becomes wider near the delta of the Mackenzie River. It never gets bigger than 145 km (90 mi). Near the coast, the depths are shallower than 60 m (200 ft). The quickly get bigger northwards up to a few kilometers. There are many small islands in the sea and in the delta of the Mackenzie River. A few larger ones are west of the Mackenzie River, such as Herschel Island (4 km (2.5 mi) off the shore, and Barter Island (0.3 km (0.19 mi) from the coast. The coasts are low, with the maximum elevations between 250 and 750 m (820 and 2,460 ft). The soil is frozen all year around forming permafrost. Only the top few tens centimeters thaw in summer. Buildings have to be above ground on wooden poles.

The shoreline of the Beaufort Sea is covered with tundra. It is the northern limit of the polar bear in North America. The Mackenzie River is an important place to live for whales and sea birds. The delta of Mackenzie River has many lakes and ponds. The muskrat is one animal that lives here.

The sea has about 80 species of zooplankton, more than 70 species of phytoplankton, and nearly 700 species of polychaetes, bryozoans, crustaceans and mollusks. But there are not very many of the animals because of the cold climate. Important fish species include polar cod, Arctic cod, saffron cod, Arctic char, chum salmon, Arctic cisco, least cisco, lake whitefish, broad whitefish, Pacific herring, fourhorn sculpin, inconnu and flatfish.

All content from Kiddle encyclopedia articles (including the article images and facts) can be freely used under Attribution-ShareAlike license, unless stated otherwise. Cite this article:
Beaufort Sea Facts for Kids. Kiddle Encyclopedia.