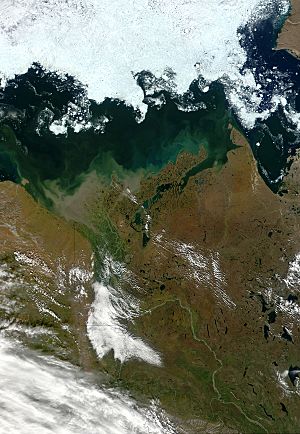 The Mackenzie River is a major river in northern Canada. It is named after famous explorer, Alexander Mackenzie. The river's watershed drains parts of Alberta, British Columbia, the Northwest Territories, Saskatchewan, and the Yukon. It flows north, for 1,738 kilometres (1,080 mi), from Great Slave Lake to the Arctic Ocean. There are only a few small towns on the river, including Fort Providence and Norman Wells. The river is used as a boat transport route during the ice-free summer.

Tributaries of the river include the Liard, Keele, Great Bear, Arctic Red and Peel Rivers. The Slave River, Peace River and Athabasca River provide most of the water in Great Slave Lake.

All content from Kiddle encyclopedia articles (including the article images and facts) can be freely used under Attribution-ShareAlike license, unless stated otherwise. Cite this article:
Mackenzie River Facts for Kids. Kiddle Encyclopedia.