Kids Encyclopedia Facts
Not to be confused with Great Lakes.

Great Slave Lake (French: Grand lac des Esclaves) is the second-largest lake in the Northwest Territories of Canada. It is the deepest lake in North America at 614m, and the ninth-largest lake in the world. It is 480 kilometres (300 mi) long and 19 to 109 kilometres (12 to 68 mi) wide. It covers 27,200 square kilometres (10,502 sq mi). The lake shares its name with the Slavey First Nations. Towns on the lake include: Yellowknife, Hay River, Behchoko, Fort Resolution, Lutselk'e, Hay River Reserve, Dettah and N'Dilo.

North American Aboriginal Peoples were the first people to live around the lake. They built communities including Dettah, which still exists today. British fur trader Samuel Hearne explored the area in 1771 and crossed the frozen lake. He named it Lake Athapuscow. This was a misunderstanding of the name Athabaska. In 1897-1898, the American frontiersman Charles "Buffalo" Jones traveled to the Arctic Circle.

In the 1930s, gold was discovered there, and the city of Yellowknife was founded. It became the capital of the Northwest Territories. In 1967, an all-season highway was built around the lake, originally an extension of the Mackenzie Highway but now known as Yellowknife Highway or Highway 3. On January 24, 1978, a Soviet Radar Ocean Reconnaissance Satellite, named Kosmos 954 fell from orbit and broke apart. The satellite had an on board nuclear reactor. Pieces of the nuclear core fell near the Great Slave Lake. 90% of the nuclear debris was recovered by a group called Operation Morning Light. They included people from both the United States and Canada. 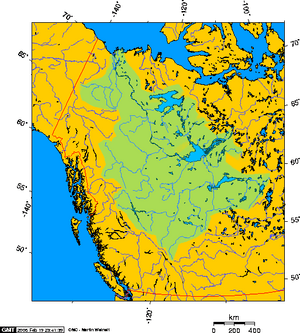 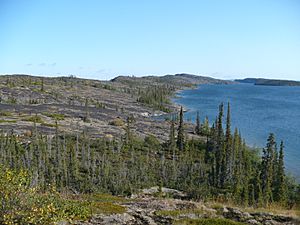 The Hay, Slave and Taltson Rivers enter the lake. The Mackenzie River flows out. The western shore has forests, but the east shore and northern arm are tundra-like. The southern and eastern shores reach the edge of the Canadian Shield. The Great Slave Lake remains from a large post-glacial lake along with other lakes such as the Great Bear and Athabasca.

There is the nesting site of a flock of Whooping Cranes south of Great Slave Lake, in a remote corner of Wood Buffalo National Park.

There is one ice road on Great Slave Lake. It connects Yellowknife to Dettah. 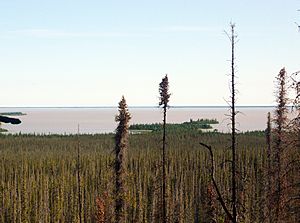 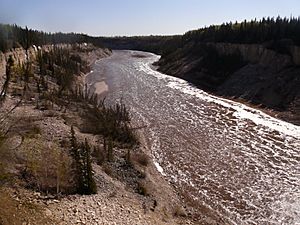 Hay River, one of the tributaries of Great Slave Lake

All content from Kiddle encyclopedia articles (including the article images and facts) can be freely used under Attribution-ShareAlike license, unless stated otherwise. Cite this article:
Great Slave Lake Facts for Kids. Kiddle Encyclopedia.