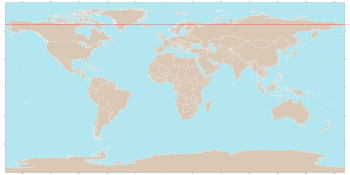 A world map. The Arctic Circle is shown as the red line.

The Arctic Circle is one of the five major circles of latitude (imaginary lines around the Earth) that are often marked on maps of the Earth. This is the parallel of latitude that (in 2000) runs 66° 33' 39" north of the Equator.

Countries which are partly within the Arctic Circle are:

The position of the Arctic Circle is not fixed. It directly depends on the Earth's axial tilt. The axial tilt fluctuates within a margin of 2° over a 40,000-year period, mostly due to tidal forces from the orbit of the Moon. The tilt is currently diminishing, so the Arctic Circle is drifting northwards at a speed of about 15 m (49 ft) per year.

All content from Kiddle encyclopedia articles (including the article images and facts) can be freely used under Attribution-ShareAlike license, unless stated otherwise. Cite this article:
Arctic Circle Facts for Kids. Kiddle Encyclopedia.