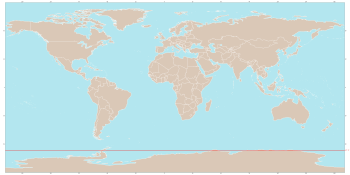 A world map. The Antarctic Circle is shown as the red line.

The Antarctic Circle is one of the five major circles of latitude that mark maps of the Earth. It is the parallel of latitude at 66° 33′ 39″ south of the Equator, crossing mostly the Southern Ocean.

The area south of this circle is named the Antarctic, and the zone to the north is the Southern Temperate Zone.

There is no permanent population of persons south of the Antarctic Circle. There are research centers from some nations on Antarctica. Teams of scientists live in the research centers for part of the year. In past centuries some whaling stations were set up on Antarctica and some of the whalers would live there for a year or more. At least three children have been born in Antarctica. It is one of the coldest places on earth.The lowest temperature ever recorded on earth was recorded in Antarctica (-129.3)

All content from Kiddle encyclopedia articles (including the article images and facts) can be freely used under Attribution-ShareAlike license, unless stated otherwise. Cite this article:
Antarctic Circle Facts for Kids. Kiddle Encyclopedia.