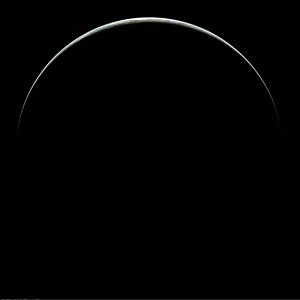 The Earth during the summer solstice in June 2017

Since prehistory, the summer solstice has been seen as a significant time of year in many cultures, and has been marked by festivals and rituals. Traditionally, in many temperate regions (especially Europe), the summer solstice is seen as the middle of summer and referred to as "midsummer". Today, however, in some countries and calendars it is seen as the beginning of summer. 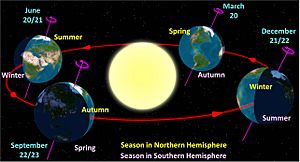 Although the summer solstice is the longest day of the year for that hemisphere, the dates of earliest sunrise and latest sunset vary by a few days. This is because the Earth orbits the Sun in an ellipse, and its orbital speed varies slightly during the year.

Although the Sun appears at its highest altitude from the viewpoint of an observer in outer space or a terrestrial observer outside tropical latitudes, the highest altitude occurs on a different day for certain locations in the tropics, specifically those where the Sun is directly overhead (maximum 90 degrees elevation) at the subsolar point. This day occurs twice each year for all locations between the Tropic of Cancer and Tropic of Capricorn because the overhead Sun appears to cross a given latitude once before the day of the solstice and once afterward. For example, Lahaina Noon occurs in May and July in Hawaii. See solstice article. For all observers, the apparent position of the noon Sun is at its most northerly point on the June solstice and most southerly on the December solstice.

2016 was the first time in nearly 70 years that a full moon and the Northern Hemisphere's summer solstice occurred on the same day. The 2016 summer solstice's full moon rose just as the Sun set.

The significance given to the summer solstice has varied among cultures, but most recognize the event in some way with holidays, festivals, and rituals around that time with themes of religion or fertility. In some regions, the summer solstice is seen as the beginning of summer and the end of spring. In other cultural conventions, the solstice is closer to the middle of summer. 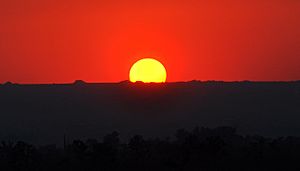 Solstice is derived from the Latin words sol (Sun) and sistere (to stand still). 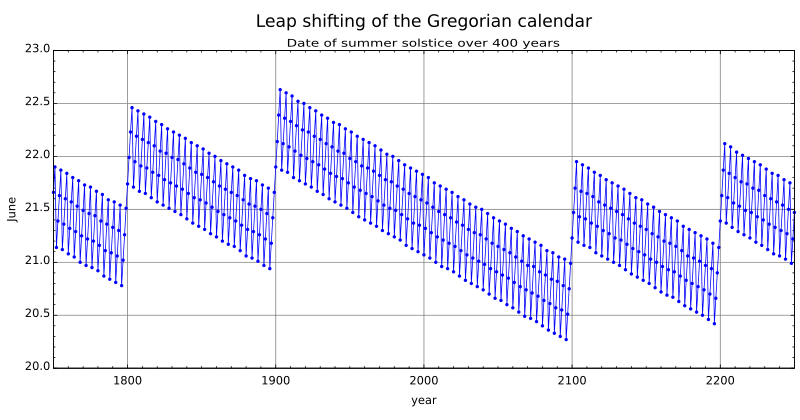 Winter solstice in the Southern Hemisphere

Length of the day on the summer solstice of the north

The data is arranged geographically and within the tables from the longest day to the shortest one.

All content from Kiddle encyclopedia articles (including the article images and facts) can be freely used under Attribution-ShareAlike license, unless stated otherwise. Cite this article:
Summer solstice Facts for Kids. Kiddle Encyclopedia.