Duanwu Festival (the Dragon Boat Festival) is a festival originating from ancient China. It commemorates Qu Yuan, a writer and a government leader who lived a long time ago and died because he loved his country very much. Duanwu Festival is always on the 5th day of the 5th month of China's old calendar, but—because that calendar is based on changes in the moon and not the sun—it is not always on the same day of the new calendar. The old calendar adds a 13th month when it is very different from the seasons, though, so Duanwu Festival is always in late spring. 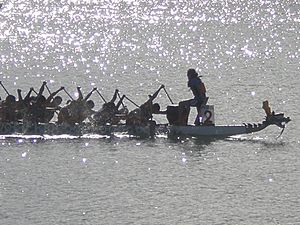 In Chinese, the Dragon Boat Festival is usually called Duānwǔ Jié, which means the "Holiday of Welcoming the Seventh". This name is based on the old calendar, which used a group of 12 names as a kind of week. Chinese people write it 端午節 in traditional characters and 端午节 in simplified characters.

A long time ago in China, this holiday may have celebrated the harvest of "winter wheat" or dragon gods with power over rivers and seas. By the time of Sima Qian, an important writer of history who lived around 100 BC, different people used the festival to remember Qu Yuan, Wu Zixu, or Cao E. Today, most Chinese people are taught that the holiday remembers Qu Yuan. 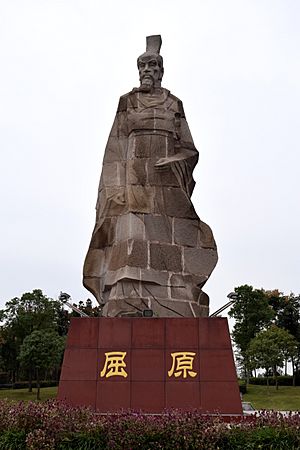 Qu Yuan was an important writer of poems who lived around 300 BC. One of his greatly respected work Lisao is about his hard living. His works had also translated into English. They called The Nine Songs: A Study of Shamanism in Ancient China and Tian Wen: A Chinese Book of Origin. He was born in the central valley of Yangtze River (Chang Jiang) and lived at a time when the government of China was very weak. Qu Yuan's part was called Chu, and its king Xiong Huai was so powerful that he controlled Hubei, Hunan, Jiangxi, and most of the places around them. King Huai listened to other leaders who said bad things about Qu Yuan and made him move to the countryside twice. King Huai also made other mistakes that also hurt Chu. The second time that Qu Yuan was sent away, he wrote a long poem about his sadness and then killed himself by walking into the Miluo River with a heavy stone. People don't agree about exactly why he did this but most think it was because of sadness for his country or a last try to make his king pay attention to his many mistakes.

The Republic of China celebrated the Dragon Boat Festival as Poets' Day to celebrate Qu Yuan and other Chinese writers.

For a long time, the People's Republic of China did not pay attention to the Dragon Boat Festival but, in 2005, it was one of three traditional Chinese holidays approved for celebration. Since 2008, it has been a national holiday.

All over China, people make and eat little pyramids of sticky rice called zongzis to celebrate the Dragon Boat Festival. In southern China, some people also race dragon boats in rivers or in the sea. Both traditions are said to have started when local people ran to the Miluo River to throw zongzis around Qu Yuan's body to protect it from fish and dragons.

There are also some older traditions to get ready for the Chinese summer, like drinking rice wine with pesticides to avoid snakes and mosquitos. These are less common today. 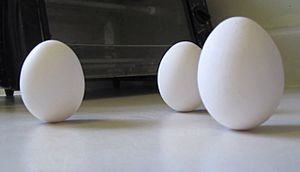 Get rid of evil spirit and diseases

People will make and wear fragrant pouches, put mugwort and calamus plants on doors and windows. They also give children five colors of silk to let them wear on the wrists to get send away the bad luck and diseases. 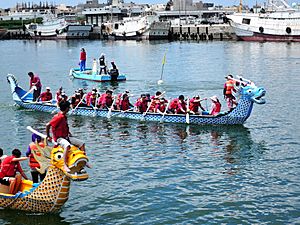 All content from Kiddle encyclopedia articles (including the article images and facts) can be freely used under Attribution-ShareAlike license, unless stated otherwise. Cite this article:
Duanwu Festival Facts for Kids. Kiddle Encyclopedia.