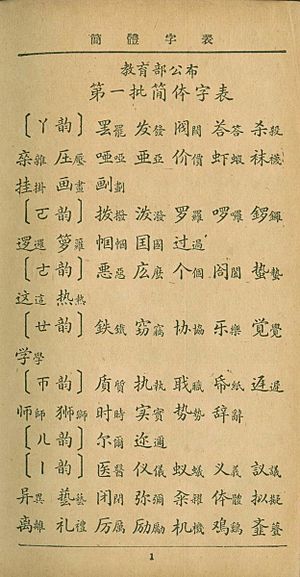 The first batch of Simplified Characters introduced in 1935 consisted of 324 characters.

When the People's Republic of China was formed in 1949, the Communist Party of China under Mao Zedong wanted to help the Chinese people read and write, most of which could not do so. The government hoped that by reducing the number of strokes needed to write characters, along with many other changes in the education system, the Chinese language would become more like Japanese, in which the Empire of Japan brought a lot of changes to the Japanese writing system during the Meiji Restoration to make education more widely available to all Japanese citizens. Mao also hoped that the simplification of Chinese characters would begin a shift away from the character system itself that would eventually lead Chinese-speakers to using only a phonetic alphabet to write.

The first set of simplified Chinese characters were first put to public use in 1956. Over time, more characters became "simplified", or existing ones changed, once in 1964 and again in 1978 and 1984. Many people did not like these changes because too many characters with different meanings were merged.

In hopes of promoting phonetic writing, the CCP was also working creating a standard romanization to accurately represent the pronunciation of Standard Chinese, pinyin, which was introduced to primary schools in 1958.

Today, simplified Chinese characters are used throughout Mainland China. It is also taught and used in some countries in Southeast Asia, including Singapore, and Malaysia.

All content from Kiddle encyclopedia articles (including the article images and facts) can be freely used under Attribution-ShareAlike license, unless stated otherwise. Cite this article:
Simplified Chinese characters Facts for Kids. Kiddle Encyclopedia.