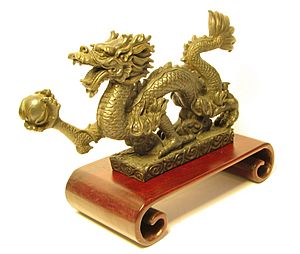 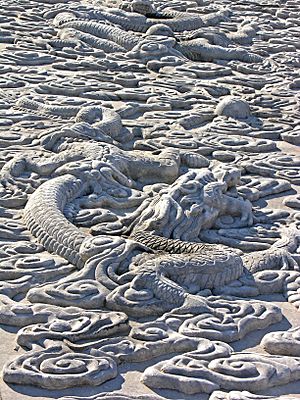 Chinese dragons are legendary creatures in Chinese mythology and Chinese folklore. The dragons have many animal-like forms such as turtles and fish, but are most commonly depicted as snake-like with four legs. Chinese dragons traditionally symbolize potent and auspicious powers, particularly control over water, rainfall, typhoons, and floods. The dragon is also a symbol of power, strength, and good luck for people who are worthy of it. With this, the Emperor of China usually used the dragon as a symbol of his imperial power and strength.

In Chinese daily language, excellent and outstanding people are compared to a dragon, while incapable people with no achievements are compared with other, disesteemed creatures, such as a worm. A number of Chinese proverbs and idioms feature references to a dragon, such as "Hoping one's son will become a dragon"

Historically, the dragon was associated with the Emperor of China and used a symbol to represent imperial power. The dragon is sometimes used in the West as a national emblem of China. However, this usage within either the People's Republic of China or the Republic of China on Taiwan as the symbol of nation is not common. Instead, it is generally used as the symbol of culture.

The ancient Chinese self-identified as "the descendants of the dragon" because the Chinese dragon is an imagined reptile that represents evolution from the ancestors and qi energy. The presence of dragons within Chinese culture dates back several thousands of years with the discovery of a dragon statue dating back to the fifth millennium BC from the Yangshao culture in Henan in 1987.

Ruler of weather and water

Chinese dragons are strongly associated with water and weather in popular religion. They are believed to be the rulers of moving bodies of water, such as waterfalls, rivers, or seas.

A close up view of one full dragon (and the tail end and claw of another) from the Nine Dragons handscroll painted in AD 1244 by Chen Rong, an artist of the Song Dynasty

The number nine is special in China as it is seen as number of the heaven, and Chinese dragons are frequently connected with it. For example, a Chinese dragon is normally described in terms of nine attributes.

There are a number of places in China called "Nine Dragons", the most famous being Kowloon (in Cantonese) in Hong Kong. The part of the Mekong in Vietnam is known as Cửu Long, with the same meaning.

On auspicious occasions, including Chinese New Year and the opening of shops and residences, festivities often include dancing with dragon puppets. These are "life sized" cloth-and-wood puppets manipulated by a team of people, supporting the dragon with poles. They perform choreographed moves to the accompaniment of drums, drama, and music. They also wore good clothing made of silk.

All content from Kiddle encyclopedia articles (including the article images and facts) can be freely used under Attribution-ShareAlike license, unless stated otherwise. Cite this article:
Chinese dragon Facts for Kids. Kiddle Encyclopedia.