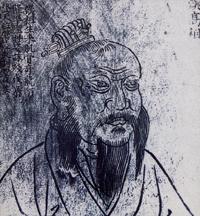 One day, Liu Bang's mother slept near the river bank. Suddenly, thick clouds darkened the sky and it thundered. Liu Bang's father, Liu Tai Gong, felt it strange and he worried over his wife's safety. He went to find his wife immediately. When Liu Tai Gong arrived, he saw a dragon sleeping on her body. After this incident, Liu Tai Gong's wife had a baby and Liu Bang was born soon!

According to the Records of the Grand Historian, Liu Bang looked like the dragon. Also, there were 72 moles on his left leg. People saw a dragon following Liu Bang all the time. For the personality, Liu Bang was kind and he loved helping poor people. He liked drinking wines with his friends as well.

All content from Kiddle encyclopedia articles (including the article images and facts) can be freely used under Attribution-ShareAlike license, unless stated otherwise. Cite this article:
Emperor Gaozu of Han Facts for Kids. Kiddle Encyclopedia.