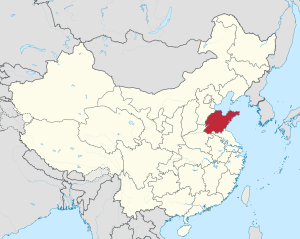 Shandong (Chinese: 山东) is a province on the east coast of China. It borders Hebei in its northwest, Henan in its west, and Anhui and Jiangsu in its south. Across the Bohai Strait to its north is Liaodong Peninsula, and across the Yellow Sea to the east is Korean Peninsula. Its capital is Jinan, and its largest city is Qingdao.

All content from Kiddle encyclopedia articles (including the article images and facts) can be freely used under Attribution-ShareAlike license, unless stated otherwise. Cite this article:
Shandong Facts for Kids. Kiddle Encyclopedia.