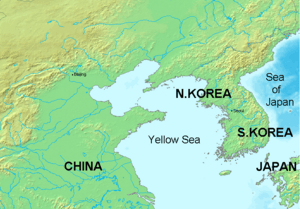 The Yellow Sea is the northern part of the East China Sea. It is between Mainland China and the Korean peninsula. The northwestern part is called the Bohai Sea. The name "Yellow Sea" comes from the silt particles that color its water. The particles come from the Yellow River. Smaller rivers include the Yalu and Han Rivers.

All content from Kiddle encyclopedia articles (including the article images and facts) can be freely used under Attribution-ShareAlike license, unless stated otherwise. Cite this article:
Yellow Sea Facts for Kids. Kiddle Encyclopedia.