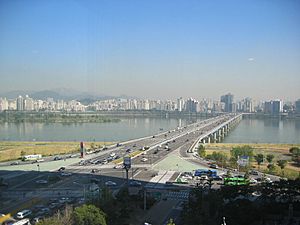 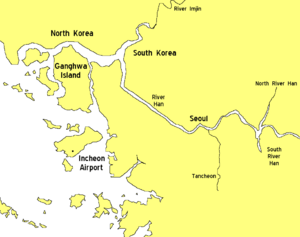 The Han River is a major river in South Korea and the fourth longest river in the Korean Peninsula. Shortly after flowing through Seoul the rover merges with the Imjin River and flows into the Yellow Sea. The total length of this river is about 514km. The Han River played an important role in Korean History. However, it is no longer actively used for navigation because it is located at the borders of the two Koreas.

The Han River originates from two rivers, the Namhan River and the Bukhan River, and it is called the Han River from which two rivers joins. The Han River is about 514 kilometers long (the fourth longest river on the Korean peninsula) and stretches over one kilometer at its broadest point. 27 bridges cross the river, connecting the north and south part of Seoul. The riverbank area is used as parks and sports facilities.

In Korean history, Han river played a central role. The rise and fall of the nation depended on taking the Han river. Especially in three kingdom period, there were fierce struggles to take the Han river. Baekje was the first to take the Han river. They recognized it as a primary waterway that links the central western region of the peninsula with the Yellow Sea. The kingdom of Goguryeo took the Han river during the reign of its King Jangsu. In 553, Silla broke its alliance with Baekje and took the control of the entire river.

Han River has been called by different names during the period of the three kingdom period. The state of Goguryeo called it the Arisu, Baekje called it the Ugniha, while the kingdom of Silla termed it the Iha. 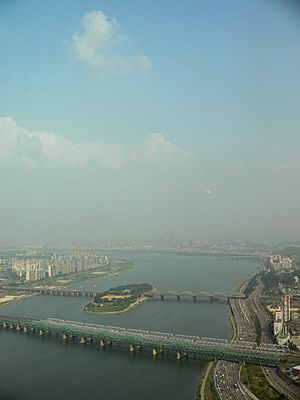 Among 27 bridges, Hangang Railway Bridge was the first one to be built. It opened on July fifth, 1900. Currently, there are 27 bridges. Two bridges, World Cup Bridge and Amsa Bridge, are planned.

Each park has its unique characteristics that fit the district. Yeouido Park, Jamsil Park, and Ttukseom Park are especially popular because of the ferry cruise services on Han River. Taking the ferry cruise, you can see city buildings, river area and enjoy the river breeze. Ttukseom park is famous for windsurfing and water-skiing. You can experience all sorts of lesiure sports in here.

There are many things you can also enjoy in other Han River parks. You can enjoy yachting, boating, fishing, camping, inline skating, etc. There are also many sports facilities including soccer fields, volleyball courts, basketball courts and swimming pools.

All content from Kiddle encyclopedia articles (including the article images and facts) can be freely used under Attribution-ShareAlike license, unless stated otherwise. Cite this article:
Han River Facts for Kids. Kiddle Encyclopedia.