South Korea is a country in the southern part of the Korean peninsula, in the north east region of Asia. The capital city is Seoul. The official name of South Korea is the Republic of Korea in English, 대한민국 (Daehanminguk) in Korean writing (Hangeul), and 大韓民國 in Chinese characters (Hanja). About half of the country's people live in its capital city, Seoul, or near the city in the metropolitan area. Korea's Seoul metropolitan area is one of the most populous metropolitan areas in the world. In fact, some sources say it is the second most populous after Tokyo, Japan.

South Korea's history began with Dangunwanggeom's Gojoseon. Gojoseon was conquered by Han China. After Gojoseon collapsed, there were a lot of countries such as Buyeo, Okjeo, Dongyae and Samhan. But Baekje, Goguryeo and Silla were the strongest. So their period began, and it is called the Three Kingdoms Period. Goguryeo and Baekje were conquered by Silla and Dang China's allied forces, and Silla unified the three kingdoms. There was another country, Balhae. Balhae was founded by Dae Jo-Young. Later Silla and Balhae's period is called South and North Countries Period. A rebellion in Later Silla caused the birth of a new nation: Goryeo, which was founded by Wanggeon. Mongolia's invaded Goryeo. Near the end of the Goryeo period, there was a great general Lee Seong-Gye. The king of Goryeo directed him to occupy Yodong, but he opposed. However, Lee Seong-Gye went to Yodong to occupy it, but he returned to Goryeo and he revolted. His revolt succeeded, and he founded the country Joseon. Joseon's first king, Taejo, moved the capital to Hanyang (Seoul). Joseon's fourth king, Sejong, made the Korean alphabet, Hangeul. Joseon's twenty-second king, Jeongjo, built Hwaseong Fortress in Suwon. Joseon's twenty-sixth king, Gojong, changed the country's name to Daehanjeguk. When Daehanjaeguk's power weakened, Japan occupied it for 35 years until Japan's defeat in World War II in 1945. In 1950, there was a big war, the Korean War. As a result, Korea was divided into two countries, North and South. 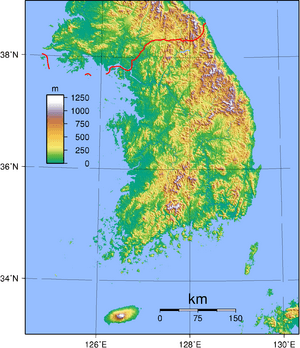 South Korea occupies the southern portion of the Korean Peninsula, which extends some 1,100 km (680 mi) from the Asian mainland. This mountainous peninsula is flanked by the Yellow Sea to the west, and the Sea of Japan to the east. Its southern tip lies on the Korea Strait and the East China Sea.

South Korea's terrain is mostly mountainous, most of which is not arable. Lowlands, located primarily in the west and southeast, make up only 30% of the total land area. 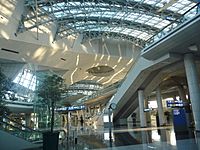 South Korea developed the HEMU 430X high-speed train, which can travel at over 430 km/h (267 mph), making South Korea the world's fourth country after France, Japan and China to develop a high-speed train running above 420 km/h on conventional rails.

South Korea is the world's fifth-largest nuclear power producer and the second-largest in Asia as of 2010[update]. Nuclear power in South Korea supplies 45% of electricity production, and research is very active with investigation into a variety of advanced reactors, including a small modular reactor, a liquid-metal fast/transmutation reactor and a high-temperature hydrogen generation design. Fuel production and waste handling technologies have also been developed locally. It is also a member of the ITER project.

South Korea is not allowed to enrich uranium or develop traditional uranium enrichment technology on its own, because of US political pressure, unlike most major nuclear powers such as Japan, Germany, and France, competitors of South Korea in the international nuclear market. This impediment to South Korea's indigenous nuclear industrial undertaking has sparked occasional diplomatic rows between the two allies. While South Korea is successful in exporting its electricity-generating nuclear technology and nuclear reactors, it cannot capitalize on the market for nuclear enrichment facilities and refineries, preventing it from further expanding its export niche. South Korea has sought unique technologies such as pyroprocessing to circumvent these obstacles and seek a more advantageous competition. The US has recently been wary of South Korea's burgeoning nuclear program, which South Korea insists will be for civilian use only.

South Korea is the third highest ranked Asian country in the World Economic Forum's Network Readiness Index (NRI) after Singapore and Hong Kong respectively – an indicator for determining the development level of a country's information and communication technologies. South Korea ranked number 10 overall in the 2014 NRI ranking, up from 11 in 2013.

South Korea is a very rich country and is known for a lot of technology. This includes the car-maker Hyundai. The well-known global brand Samsung, which makes mobile phones, semi-conductors and electric devices, is also South Korean.

South Korea has been affected by both continental culture and marine culture because it is located on a peninsula. Ancient South Korean culture has developed with the culture of Siberia, the northern part of Central Asia, the southern part of Southeast Asia and neighboring countries like China.

South Korea's customary and official language is Korean. Many linguists says that it is linked with Altaic languages. Hangul, the alphabet which is used to write Korean, was published by King Sejong the Great of Joseon in 1446. It is the only alphabet in the word whose creator, invention day and invention principle is known. 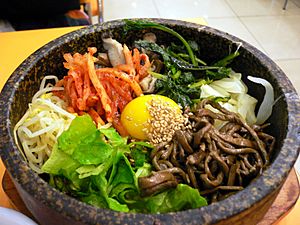 Korean cuisine, hanguk yori (한국요리; 韓國料理), or hansik (한식; 韓食), has evolved through centuries of social and political change. Ingredients and dishes vary by province. There are many significant regional dishes that have proliferated in different variations across the country in the present day. The Korean royal court cuisine once brought all of the unique regional specialties together for the royal family. Meals consumed both by the royal family and ordinary Korean citizens have been regulated by a unique culture of etiquette.

Soups are also a common part of a Korean meal and are served as part of the main course rather than at the beginning or the end of the meal. Soups known as guk (국) are often made with meats, shellfish and vegetables. Similar to guk, tang (탕; 湯) has less water, and is more often served in restaurants. Another type is jjigae (찌개), a stew that is typically heavily seasoned with chili pepper and served boiling hot.

Korea is unique among East Asian countries in its use of metal chopsticks. Metal chopsticks have been discovered in Goguryeo archaeological sites.

The most representative traditional music of Korea is Arirang and every region has its own folk song. Many South Korean singers are well known in world as K-pop is steadily developing. There are lots of K-pop singers like Boa, TVXQ, Super Junior, Girls' Generation, Shinee, Beast, etc.

All content from Kiddle encyclopedia articles (including the article images and facts) can be freely used under Attribution-ShareAlike license, unless stated otherwise. Cite this article:
South Korea Facts for Kids. Kiddle Encyclopedia.