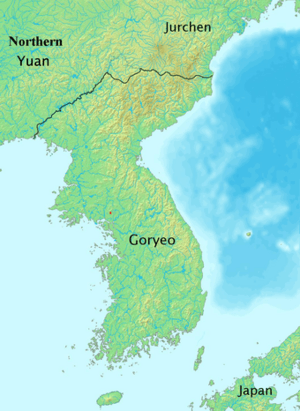 The Goryeo Dynasty or Koryo Dynasty also called the "Kingdom of Goryeo", is one of the Korean dynasties which existed from 918 to 1392. It began in 918 with Emperor Taejo. The name "Goryeo" came to be said as "Korea" by foreigners and is still the name of the country. Goryeo united the Later Three Kingdoms of Korea (Later Baekje, Later Goguryeo, and Silla) and by 1374 ruled most of the Korean peninsula until it was removed by the Joseon dynasty in 1392. Goryeo increased its borders to Chung-cheon river and Youngheong (936~943) and the Amnok River (933).

Silla had accomplished a unification of the Three Kingdoms of Korea in 668. But it weakened as local lords achieved power during the end of the 9th century. The country entered a period of civil war and rebellion, led by Gung Ye, Gi Hwon, Yang Gil, and Gyeon Hwon. Gung Ye established Hugogureo (meaning "Later Goguryeo") and Wang Geon (Later, Tae jo) made a contribution as Gung Ye's subordinate. However, Gung Ye became more and more tyrannical and finally killed his own wife and son. Also he insisted that he was Maitreya (the future Buddha). Meanwhile, Wang Geon increased his power as he conquered Geumsung area in Later Baekje. Finally, some people who followed Wang Geon broke out the rebellion and he named the dynasty as Goryeo and changed its capital city to Song-ak.

Goryeo made the policy to win the favor of people and maintained good relationship with Silla. As a result, Silla surrendered unconditionally to Goryeo. Meanwhile, Later Baekje collapsed by itself as princes fought each other over uccession to the throne. Because of the internal conflict, Later Baekje became weaker and weaker and was conquered by Goryeo. Finally, Goryeo united the Later Three Kingdoms again (936) and accomplished re-unification of Korean people.

Tae jo made important policies. First, he insisted that Goryeo should expand its territory to further North. It is because he succeed to Goguryeo (ancient Korean kingdom founded in 37 BC–668) and Goguryeo had the biggest territory in Korean history. So, Tae jo named the dynasty as Goryeo from Goguryeo and tried to take back the territory of Goguryeo. He emphasized the importance of Sukyung area because it is placed in the North part and kept in check Gu Ran (kind of Mongolian) that made an effort to come down to Goryeo. Later, all of these policies contributed to expanding its territory to Apnok River. Also, Tae Jo made the policy which unified all people from different dynasties (Baekje, Silla, Goguryeo, Balhae..). Because of this policy, Goryeo is considered that it accomplished actual unification compared to Silla.

All content from Kiddle encyclopedia articles (including the article images and facts) can be freely used under Attribution-ShareAlike license, unless stated otherwise. Cite this article:
Goryeo Facts for Kids. Kiddle Encyclopedia.