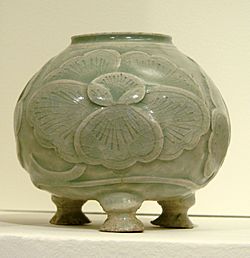 Celadon is a term for ceramics meaning both a type of glaze and color. Celadon originated in China. Kilns such as the Longquan kiln in Zhejiang province are known for their celadon works. Celadon production later spread to other regions in Asia, such as Japan and Korea and Thailand.

All content from Kiddle encyclopedia articles (including the article images and facts) can be freely used under Attribution-ShareAlike license, unless stated otherwise. Cite this article:
Celadon Facts for Kids. Kiddle Encyclopedia.