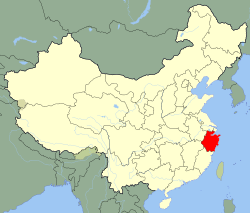 the place of Zhejiang Province

Zhejiang is a province in east China. "Zhejiang" is named by the Qiantang River, which is also called "Zhejiang". "Zhejiang" means "bent river". It has a population of more than 51 million people. The capital of Zhejiang Province is Hangzhou. 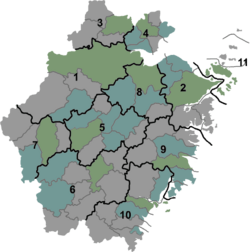 All content from Kiddle encyclopedia articles (including the article images and facts) can be freely used under Attribution-ShareAlike license, unless stated otherwise. Cite this article:
Zhejiang Facts for Kids. Kiddle Encyclopedia.