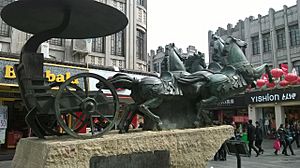 Wenzhou (温州) is an important city in the Zhejiang province of the People's Republic of China. It has two satellite cities and six counties. In 2007, it had 7,645,700 living in it. It is in a very mountainous place. Because of that, it had been separated for a long time from the rest of the country. This made its culture and language very different from other areas.

Wenzhou was a prosperous foreign treaty port, which remains well-preserved today. It is in a very mountainous region and, as a result, has been isolated for most of its history from the rest of the country, making the local culture and language very different from those of neighbouring areas. Many of its people move to other countries like Europe and the United States. It is also famous for its oranges and bamboo.

All content from Kiddle encyclopedia articles (including the article images and facts) can be freely used under Attribution-ShareAlike license, unless stated otherwise. Cite this article:
Wenzhou Facts for Kids. Kiddle Encyclopedia.