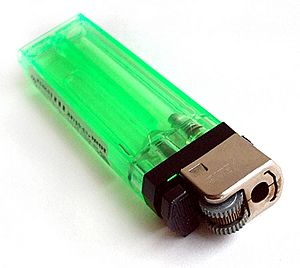 A lighter is a tool that can produce a flame, on demand. It is made of a plastic or metal container, which contains a flammable liquid or gas. There is also a means of producing the flame, and extinguishing it, when it is no longer needed.

There is often an electric cigarette lighter in cars. When the lighter button is pushed in, a metal heating element is connected to the car's 12 volt electricity supply, and it heats up to a high temperature. The lighter is then removed from the socket and the element is used to light the tip of a cigarette. The socket that the lighter goes in can also be used to power mobile phones and other electronics, and the term "cigarette lighter" is now commonly used to refer to this type of connector even when not being used to light a cigarette.

All content from Kiddle encyclopedia articles (including the article images and facts) can be freely used under Attribution-ShareAlike license, unless stated otherwise. Cite this article:
Lighter Facts for Kids. Kiddle Encyclopedia.