Johann Wolfgang Döbereiner (13 December 1780 – 24 March 1849) was a German chemist who is best known for work that foreshadowed the periodic law for the chemical elements and inventing the first lighter, which was known as the Döbereiner's lamp. He became a professor of chemistry and pharmacy at the University of Jena. 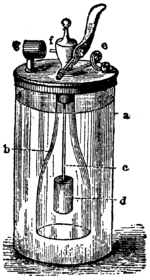 As a coachman's son, Döbereiner had little opportunity for formal schooling. So he was apprenticed to an apothecary, reading widely and attending science lectures. He eventually became a professor at the University of Jena in 1810; he also studied chemistry at Strasbourg.

Döbereiner also is known for his discovery of furfural, for his work on the use of platinum, and for a lighter, known as Döbereiner's lamp. By 1828 hundreds of thousands of these lighters had been mass produced by the German manufacturer Gottfried Piegler in Schleiz.

All content from Kiddle encyclopedia articles (including the article images and facts) can be freely used under Attribution-ShareAlike license, unless stated otherwise. Cite this article:
Johann Wolfgang Döbereiner Facts for Kids. Kiddle Encyclopedia.