Jena is a German university city and the second largest city in Thuringia. Together with the nearby cities of Erfurt and Weimar, it forms the central metropolitan area of Thuringia with approximately 500,000 inhabitants, while the city itself has a population of about 110,000. Jena is a centre of education and research; the Friedrich Schiller University was founded in 1558 and has 21,000 students today and the Ernst-Abbe-Fachhochschule Jena counts another 5,000 students. Furthermore, there are many institutes of the leading German research societies. 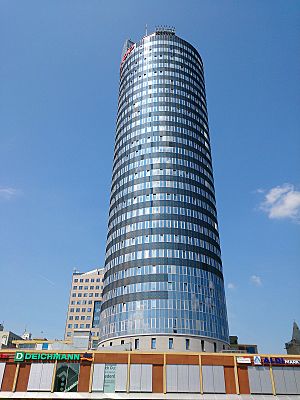 The Jen Tower is a symbol of East Germany's economy

Jena was first mentioned in 1182 and stayed a small town until the 19th century, when industry developed. For most of the 20th century, Jena was a world centre of the optical industry. As one of only a few medium-sized cities in Germany, it has some high-rise buildings in the city centre, like the Jen Tower.

The city's economy is based on the high-technology industry and research. The optical and precision industry is the leading branch to date, while software engineering, other digital businesses and biotechnology are of growing importance. Furthermore, Jena is also a service hub for the surrounding regions.

Jena lies in a hilly landscape in the east of Thuringia, within the wide valley of the Saale river.

In the neighbourhood are the Dornburg Castles and the Kapellendorf Moated Castle.

All content from Kiddle encyclopedia articles (including the article images and facts) can be freely used under Attribution-ShareAlike license, unless stated otherwise. Cite this article:
Jena Facts for Kids. Kiddle Encyclopedia.