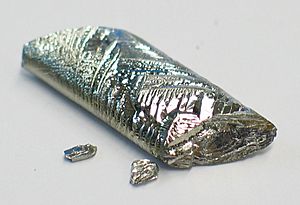 Tellurium is a chemical element. It has the chemical symbol Te and the atomic number 52. It has 52 protons and 52 electrons. Its mass number is 127.6. It has 8 natural isotopes. 4 are stable and 4 are radioactive. One of the radioactive ones lasts longer than any other isotope. It has a half life of 2.2 x 1024 years (2.2 septillion years). 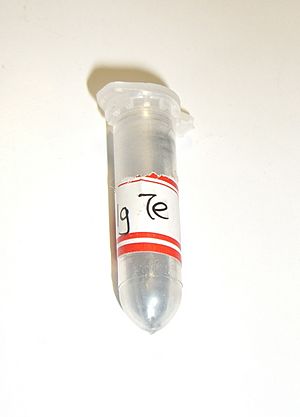 Tellurium in a tube

It is a brittle silver-white semimetal. When it is pure it has a metallic shine. It is ground easily. It can be made in an amorphous form. It is a semiconductor. It changes conductivity a little when light shines on it, similar to selenium. It is corrosive to many metals when molten.

Tellurium is an unreactive element. It can react with reactive metals to make tellurides. It can burn in air to make tellurium dioxide. It can be oxidized even more to tellurium trioxide. It does not corrode. The chemistry of tellurium is similar to some chemistry of selenium and sulfur, although its compounds are more reactive and the element is less reactive. It does not dissolve in most acids, although it dissolves in concentrated sulfuric acid to make a special red tellurium cation. 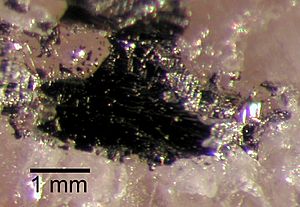 Tellurium as an element in quartz 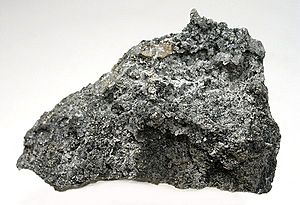 Tellurium as an element in the ground

Tellurium is a very rare mineral. There is 14 times more silver in the earth than there is tellurium. Tellurium is sometimes found as an element, but most of the times is found as tellurides. Gold tellurides (Calaverite) are found in the earth. They are valuable ores of both tellurium and gold. This gold ore was not recognized as gold during one gold rush and was used as a filler. It was then discovered that it was gold telluride, making another gold rush. Telluride cannot replace sulfide in elements like selenide does.

Tellurium can be taken from gold telluride by dissolving the gold telluride in concentrated sulfuric acid. The tellurium dissolves to make a red solution, while the gold sinks to the bottom.

The main use of tellurium is in alloys. It is used in iron, copper, and lead alloys. It makes the metals more easily machinable (able to be shaped by a machine). It improves strength and durability of lead and makes it more resistant to corrosion by sulfuric acid.

It is also used to color ceramics. It is used to make fiberglass that is used in telecommunications (telephones, internet, etc.). It helps increase the refraction. It is also used in delay blasting caps. Rubber can be ha.

Tellurium is not really used in any living things. Some fungi, though, can use tellurium instead of selenium or sulfur. Most organisms can metabolize tellurium to make dimethyl telluride, which is a garlic-smelling chemical. If someone eats a tellurium compound, it gives them garlic breath.

All content from Kiddle encyclopedia articles (including the article images and facts) can be freely used under Attribution-ShareAlike license, unless stated otherwise. Cite this article:
Tellurium Facts for Kids. Kiddle Encyclopedia.