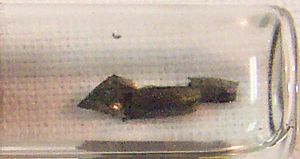 A sample of Europium in a test tube

Europium is a chemical element. It has the symbol Eu on the periodic table. It has an atomic number 63 which means it has 63 protons in one atom. It was named after the continent Europe. Its compounds can fluoresce, or glow under ultraviolet light. 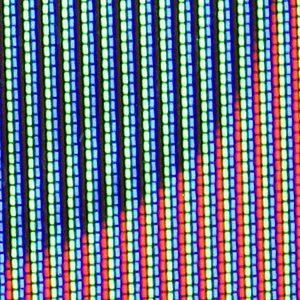 Europium is one of the elements involved in emitting red light in CRT televisions.

Relative to most other elements, commercial applications for europium are few and rather specialized. Almost invariably, its phosphorescence is exploited, either in the +2 or +3 oxidation state.

It is a dopant in some types of glass in lasers and other optoelectronic devices. Europium oxide (Eu2O3) is widely used as a red phosphor in television sets and fluorescent lamps, and as an activator for yttrium-based phosphors. Color TV screens contain between 0.5 and 1 g of europium oxide. Whereas trivalent europium gives red phosphors, the luminescence of divalent europium depends strongly on the composition of the host structure. UV to deep red luminescence can be achieved. The two classes of europium-based phosphor (red and blue), combined with the yellow/green terbium phosphors give "white" light, the color temperature of which can be varied by altering the proportion or specific composition of the individual phosphors. This phosphor system is typically encountered in helical fluorescent light bulbs. Combining the same three classes is one way to make trichromatic systems in TV and computer screens. Europium is also used in the manufacture of fluorescent glass. One of the more common persistent after-glow phosphors besides copper-doped zinc sulfide is europium-doped strontium aluminate. Europium fluorescence is used to interrogate biomolecular interactions in drug-discovery screens. It is also used in the anti-counterfeiting phosphors in euro banknotes.

An application that has almost fallen out of use with the introduction of affordable superconducting magnets is the use of europium complexes, such as Eu(fod)3, as shift reagents in NMR spectroscopy. Chiral shift reagents, such as Eu(hfc)3, are still used to determine enantiomeric purity.

A recent (2015) application of europium is in quantum memory chips which can reliably store information for days at a time; these could allow sensitive quantum data to be stored to a hard disk-like device and shipped around the country.

All content from Kiddle encyclopedia articles (including the article images and facts) can be freely used under Attribution-ShareAlike license, unless stated otherwise. Cite this article:
Europium Facts for Kids. Kiddle Encyclopedia.