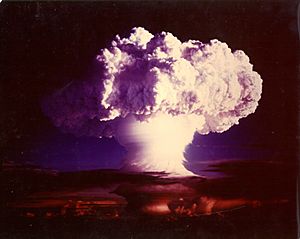 Americium was detected in the fallout from the Ivy Mike nuclear test.

Americium is a chemical element. It is a radioactive metal. It has the chemical symbol Am. It has the atomic number 95. In chemistry it is placed in a group of metal elements named the actinides. Americium is a transuranic element (Transuranic means after uranium. All the elements used after uranium are man-made). It is a radioactive element that does not exist in nature. Americium has to be made. It has a silver color. Americium is made by bombarding a plutonium target with neutrons.

The longest half life of any type of americium is 7370 years.

Americium is used in most smoke detectors. The level of radioactivity is not enough to cause cancer, so it is safe to for the people in an area where smoke detectors with americium are in use.

All content from Kiddle encyclopedia articles (including the article images and facts) can be freely used under Attribution-ShareAlike license, unless stated otherwise. Cite this article:
Americium Facts for Kids. Kiddle Encyclopedia.