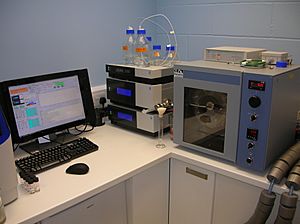 An example of a HPCCC system

The stationary phase is a flat plane, such as paper, or a substance on glass. 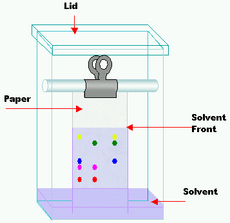 Thin layer chromatography (TLC) is a common laboratory technique similar to paper chromatography. Instead of a stationary phase of paper, it uses a thin layer of adsorbent like silica gel, alumina, or cellulose on a flat substrate. Compared to paper, it has the advantage of faster runs, better separations, and the choice between different adsorbents. For even better resolution and to allow for quantification, high-performance TLC can be used.

Column chromatography separates compounds using many chemical actions between the chemical being tested and the chromatography column (a rod with a blending of special chemicals). The column is run using either gravity or a pump.

The mixed substance to be tested is added in a small amount and is slowed by certain chemical or physical activity with the chemicals in the chromatography column. The amount of slowing depends on the type of chemicals in the substance being tested and the different phases. The time at which a certain chemical elutes (comes out of the end of the column) is called the "retention time" and there is thought to be only one for one chemical. 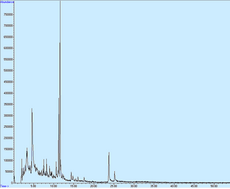 The most common stationary phase for column chromatography is silica gel, followed by alumina. Cellulose powder has been used in the past. The mobile phase is either a pure solvent or a mixture of solvents. It is chosen make the time and amount of solvent used as little as possible, while still clearly separating the chemicals being tested.

Common solvents used in HPLC are mixes of water or various organic liquids (the most common are methanol, ethanol or acetonitrile).

All content from Kiddle encyclopedia articles (including the article images and facts) can be freely used under Attribution-ShareAlike license, unless stated otherwise. Cite this article:
Chromatography Facts for Kids. Kiddle Encyclopedia.